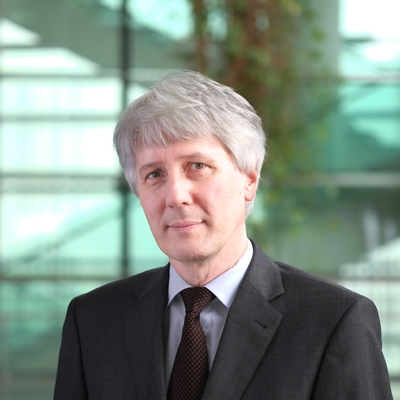 The research activities of Professor Knoll (b. 1961) focus on cyber-physical systems, development tools for fault-tolerant systems, cognitive and sensor-based robots and medical robotics.
Professor Knoll was awarded a doctorate (1988) and completed his lecturer qualification (1993) at the Technical University of Berlin. Following this, he was a full professor and Director of the Computer Engineering research group at the University of Bielefeld until 1991, when he assumed the professorship of Real-Time Systems and Robotics at TUM. In addition, from 2001 to 2005 Professor Knoll was Director of the Educational Robotics Department and a member of the management committee of the Fraunhofer Institute for Autonomous Intelligent Systems in Bonn. Since 2009, he has been a Director of Fortiss, an affiliated Institute of TUM, and Director of the Graduate School of Information Science in Health (GSISH).